Google Glass wasn’t built for broadcasting live TV. We don’t know if any other television station has attempted it.

What is it?  Google Glass is a wearable, voice-controlled computer with an optical head-mounted display and built in video camera. Glass delivers an augmented reality image to the wearer. It can search the internet, answer dictated questions, take pictures, and record video. 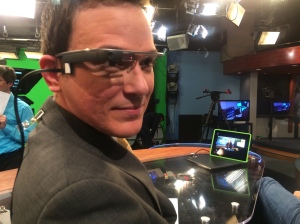 The question was: could it be used to broadcast live TV?

WRAL-TV, the CBS affiliate in Raleigh, NC,  and parent company Capitol Broadcasting Company have a legacy of innovation. We LOVE a challenge like this one.

It started by registering with Google as a developer to try to get our hands on the technology. That was taking too long, so WRAL engineer Tony Gupton suggested we get them the way anyone gets the most obscure of objects: eBAY! WRAL Chief of Engineering and Operations Pete Sockett scored and the race was on. How quickly could we learn how it works, figure out how to route the video signal from it to live TV, brainstorm and implement a plan for a continuous live feed for WRAL.com, design on air and web graphics, put together a 4 day broadcast plan, develop and launch a marketing plan to promote the weeklong #WRALGlass event? The answer: 5 days. It takes a village, people. 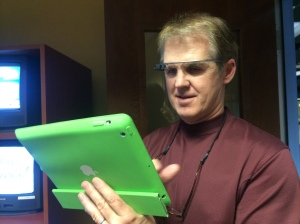 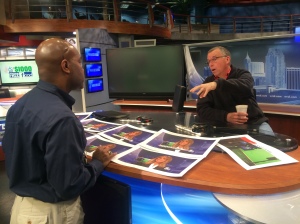 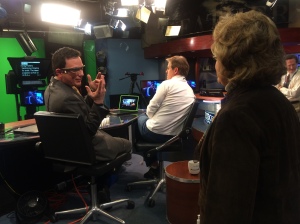 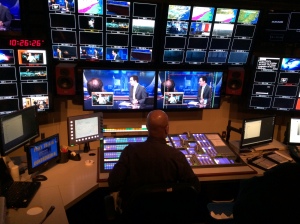 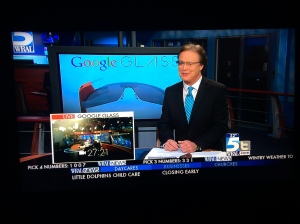 Once we had the technology and were figuring out how to operate it, we had to decide what to do with it on air. WRAL Station Manager Jim Rothschild had the idea to have different members of the morning team wear Glass so viewers could see and hear different points of view.

WRAL’s 30-year veteran Morning News anchor Bill Leslie broke the news that he would be first. 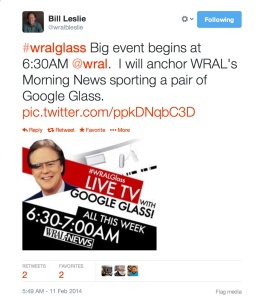 Bill’s viewpoint gave the audience a chance to see what Bill sees, from the crew chief’s directions, to three robotic cameras, to his co-anchors eating snacks during the commercial breaks. Day one of the #WRALGlass experiment was an eye opener! Bill’s commentary was priceless and we learned that head movements are really exaggerated with Glass.

Viewers rarely ever see or hear the studio crew chief, or even know what his job is. WRAL’s Stuart Todd promised managers a “show” when he stepped up to take on #WRALGlass and he delivered.

During a live newscast, the producer is like air traffic control landing six planes at once. WRAL producer Kianey Carter’s day in #WRALGlass will make you appreciate the quick thinking, clear headed, multitaskers that these folks are. Rockstars behind the scenes!

Because so many people don’t know what Google Glass is or what it does, we took a conversational approach to the TV promotion, using the news anchors to demonstrate it. We also felt it was important to show viewers what they’d be seeing during the broadcast. We created web ads to promote #WRALGlass on WRAL.com. We generated more than 480k impressions on twitter using #WRALGlass and got some national press for the experiment.

Overall, a win for innovation and a win for viewers to see a whole new perspective of local television news through Google Glass.

There was an error retrieving images from Instagram. An attempt will be remade in a few minutes.