It all started in my boss’ office when he told me WRAL was dropping CBS to become an NBC affiliate. Wait..what? I admit, I needed a minute. I mean, we’re the #1 CBS affiliate in the top 25 markets. We’re doing what?  He explained why we were dropping CBS and choosing a new partner, NBC. Then, inspiration struck!

I had an immediate vision of a promo campaign. An impossible idea that was never, ever going to be produced, but I couldn’t tell my team because they had no idea what was about to happen.

Fast forward about 4 days, the news was out and the race to launch a new network in 45 days was on. Job #1, THE SUPER BOWL in 14 days.

I mean this a network affiliation change. The biggest promotional challenge in 30 years for WRAL, and we get to announce our new partnership with NBC in Super Bowl 50 on CBS! Why not go for the craziest thing you can think of?

In a brainstorm with the WRAL Creative team. I pitched the crazy, impossible idea with “All it takes is a live, trained peacock. How hard could that be?” The room erupted in laughter and then Promotion Manager Jay Yovanovich said, “Give me a day to find one!” I love a team that’s unstoppable. And this team is incredible.

Literally, 24 hours later Jay had found the only live, imprinted peacock in the United States. Where? North Carolina, of course.Enter serendipity. Turns out, the Sylvan Heights Bird Park had the idea 6 months ago to imprint this baby peacock because “some NBC station somewhere might want to use it one day.” Seriously.

Now, we need a voice actor with a British accent who can pull off one of the creative ideas we have. Who answers the phone at the bird park? The director, who happens to have the exact voice we want and he has done voice over work! This is beginning to feel a lot like destiny.

Not only did we have a live, trained peacock. It could be brought to the WRAL Newsroom for the shoot. Ok, that opens things up! The creative team got to work. We wrote, rewrote, brainstormed, laughed our heads off, and wrote some more. In about 24 hours, we had taken a singular idea and made something bigger and better as a team! 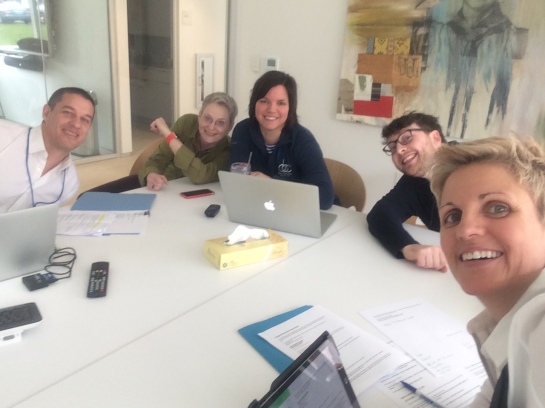 Let’s back up and talk strategy.  What’s the mission? The audience is confused by what an affiliation change is. Even my Mother called and asked me how I felt about leaving WRAL after 28 years! (No, Mom, I’m not moving.) So, yes, we need to be creative but we must also be clear.

3 Goals for the Launch

Create a buzz. We produced a 6-spot teaser campaign to get the idea going that there’s something very unusual happening in the WRAL Newsroom. These spots launched on social and web 3 days before the Super Bowl, pushing people to the game.

Be remembered. It’s very difficult for a local station to stand out in a sea of bazillion dollar ad agency commercials in the Super Bowl. And, frankly, humor is hard to do. But I thought we had a concept that would absolutely deliver on our 3 goals, and I thought it would be memorable.

Kill confusion. Answer viewer questions in a simple and sticky way. We produced an arsenal of these as we saw common questions emerge.

A 17-spot campaign produced in about seven days, once we knew we had the peacock! Ever heard the saying “Teamwork makes the dream work.” Well, the WRAL Creative Team was absolutely incredible on this. It truly was the most fun I’ve ever had at work.

It should be noted that in the midst of all that, we had a 3 day blackout on DIRECTV, an ice storm, and our “local” team, the Carolina Panthers, made it to the Super Bowl! Honestly, it was the most insane 2 weeks of my nearly 30 year career in television. But hey, I’d be bored if I worked at the bank.

I’d love to know your thoughts on the campaign and whether we fulfilled our mission.

Now, in 16 days, WRAL becomes an NBC affiliate and there are about 148 other items on our punch list. Gotta go.